Revenge of The Electric Vehicle

I’m pleased to announce that our new doc, Revenge of the Electric Car, begins its national theatrical rollout next week starting October 21 in LA and NY and then in 20+ cities over the next month (see list below).

If you’re in Los Angeles, please join us for our opening week launch at Landmark’s NuArt and our Opening Weekend Airstream Lounge Party!

To support our opening weekend in LA on October 22-23, we’re bringing in the electric cars from the movie and setting up shop in a vintage Airstream around the corner from the NuArt Theater. You’ll find us next to Sideshow Books at 11323 Idaho Avenue. The Airstream Lounge is our all weekend drop-in cast and crew party for friends, media makers, and well-wishers. Come on by anytime from 2:30PM to 9:30PM to say hello to Gadget, Scarlett and other stars from our team, check out the EVs (Tesla, Leaf, Volt and Porsche), and hang out with us between screenings

Co-Host a Screening at a Theater

If your group would like to co-host one of our public screenings at the NuArt (or anywhere else during run of theater), we’ll try to set it up with you. Choose a show-time from the list above (if LA), then send us an email and let us know about how many people you’d like to host. We’ll try to arrange to have a Q&A with someone from the film there with you at your show. So far we have screenings with Causecast, Bioneers, GADA, LA Burning Man, the Black Rock Yearbook, Plugin America and Global Green.

Thanks to everyone for spreading the word and making our opening week a success! 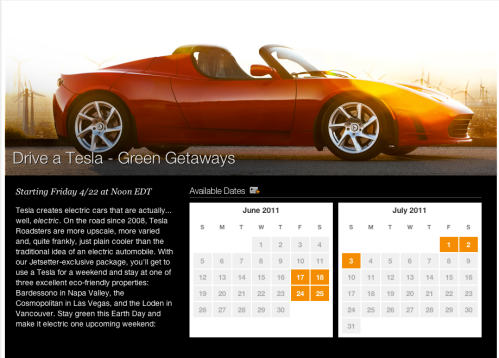 In honor of Earth Day, Tesla is partnering with luxury vacation company Jetsetter to offer thoroughly green luxury weekend getaways. Vacationers are invited to stay for a full weekend at one of three top-tier, eco-friendly hotels in North America: The Loden in Vancouver, The Cosmopolitan in Las Vegas, or the Bardessono in Napa Valley. During their stay, they will get total access to an electric Tesla Roadster for two days. This is the first time Tesla has offered an opportunity like this!

Jetsetter operates very similarly to Gilt Groupe. It’s an online community that provides members with insider access, expert knowledge and exclusive deals on the world’s greatest vacations. Sales are valid for a limited time only, and are first come first serve. Those who sign up with Jetsetter to take advantage of the Tesla deal will receive a $50 credit.

“You Are Not Alone,”…Event Benefits OxFam America

Posted via email from The Green Blog Network 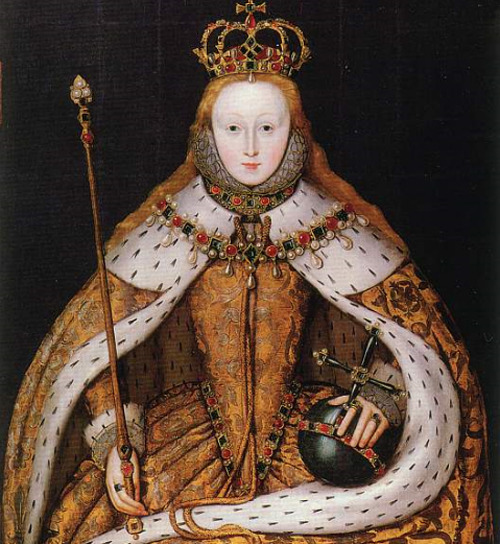 On Thursday afternoon Toyota announced it will invest $50 million in Tesla Motors and will partner with Tesla to manufacture electric vehicles (EVs). 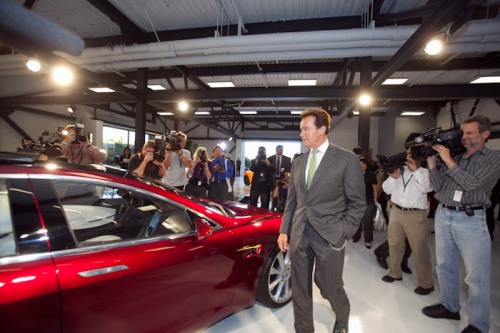 Additionally, Tesla announced that it will acquire the NUMMI plant in Fremont, California and begin production of its Model S EV in 2012. This is expected to create more than 1,000 green jobs in California.

Tesla expects to produce 20,000 EVs per year. Tesla is a California company, founded in 2003 in Silicon Valley. Their first vehicle, the Tesla Roadster, was the first production automobile to use lithium-ion battery cells and the first production EV with a range greater than 200 miles per charge that could go from 0-60 in under four seconds.

Tesla will use the NUMMI plant to begin production of its second generation vehicle, the Model S EV. This 300-mile range, seven-seat SUV will open Tesla Motors to a whole new market of car buyers.

“What we are witnessing today is an historic example of California’s transition to a cleaner, greener and more prosperous future. We challenged auto companies to innovate, and both Tesla and Toyota stepped up in a big way, not only creating vehicles that reduce emissions and appeal to consumers but also boosting economic growth,” said Governor Schwarzenegger. “I am thrilled with today’s announcement and can’t wait to see what this partnership brings next.” 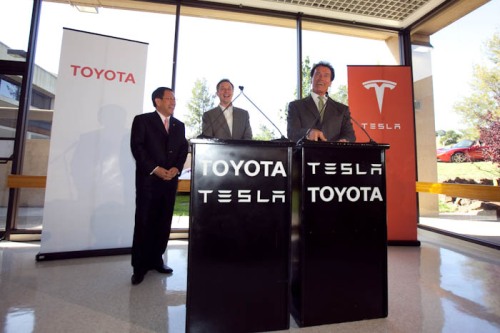 The Governor also recently signed legislation, SB 71, to create a sales tax exemption for the purchase of green-tech manufacturing equipment in California. This expanded a sales tax exemption that applied only to Zero Emission Vehicles, which Tesla took advantage of. The expanded exemption, a part of the Governor’s California Jobs Initiative, will not cost the state tax dollars; it will increase revenue by expanding the number of clean technology manufacturing companies with sites in California.