>Great To Be The Next Big Thing

It’s hard to believe that Fashion Greats such as Dior, Givenchy, Chanel were ever once teenagers with a dream.  But as with all of us, we started somewhere.

Paris is the birthplace of fashion and during this Spring Summer ’11 Fashion Week season the strength of that tradition is seen all around the city, with brilliant shows being staged in the Tuileries, the Grand Palais, reclaimed convents as well as on rooftops and in basements.

The Pedro Laurenço show took place on the Quai Malaquais in the Salle Melpomène whose ceilings are at least 10 meters high and where the convex upper arches are adorned with French National Heritage paintings.

It’s always fun to be where The Next Big Thing is happening. Greening Hollywood was there twice this past week at the start of Paris Fashion Week and we weren’t alone…Vogue editors, notably the team from Milan were also there. Vogue Italian Editor Franca Sozzani is on a mission to support new and young designers and she has staffed her ranks with writers and editors who are fanned out across the city en force on this same mission.

The vibe at this show was so Brazilian, relaxed, genial. As the famous models pulled up in their taxis and chauffeured vehicles to make it to the show’s hour-delayed start-time, the crowd was full of kisses and Portuguese greetings.

Hairstylist Guido Pila – for Redken – pulled up on a chauffeured motorcycle,www.win-win.com, one of the most brilliant urban transport systems I’ve seen in Paris. His driver stripped him of his helmet and motorcycle jacket as he dropped him off. [*Note this is the only Eco aspect of the show I’ve been able to discover byprint time.]

Nineteen-year-old Pedro’s father, Reinaldo, also a famous Brazilian fashion designer, greeted guests personally as they arrived.  Pedro who debuted for the first time in Paris only just earlier this year, is already pulling the stylemakers to his front row seatings and on only just the third day of the Paris Shows. 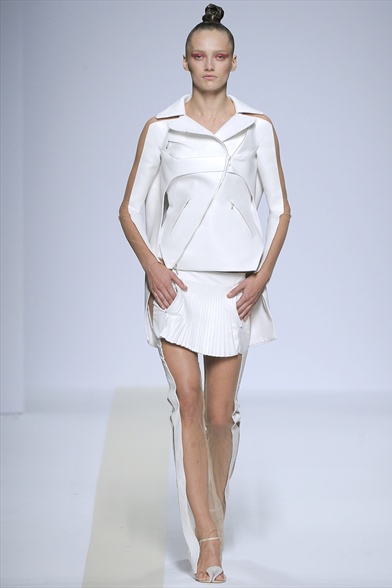